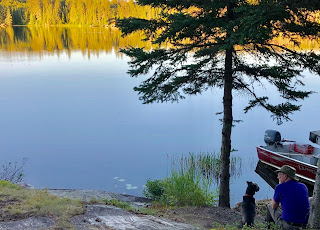 My eleven-year-old granddaughter made my day. “Did you have a fun time at the cabin?” someone asked. “I had lots of fun,” she replied.

We had spent a delightful day at the family’s cabin at Nora Lake. An idyllic spot overlooking the water, inaccessible by road until a few years ago, off the grid, no wifi, no cell phone reception unless you climbed a hill searching for a click. You enjoyed yourself in old-fashioned ways: hiking, swimming, sitting, reading, thinking, and eating and drinking. There were mosquitos, of course, and fierce, biting flies, but after all, this was Manitoba. No poison ivy though, and as yet, I haven’t pulled off any ticks.  The silence was palpable, broken only by the rumble of CP trains crossing the viaduct between the lakes.

This was cabin-living as it used to be, as far removed from modern cottage accommodation as you can imagine. Everyone slept higgledy-piggledy in a a wooden shack built almost a century ago and little changed since then. The lights and stove were fuelled by propane, water was drawn from the lake, and the calendar on the wall gave you the date in 1963. A few steps up he hill was a charming, sweet-smelling biffy, a place for silent contemplation, a room with a view.

But I digress. Did you have a fun time at the cabin?” someone had asked. “I had lots of fun,” my granddaughter replied. “‘Fun time’ doesn’t sound right,” she said. “No,” said my daughter, “that’s because ‘fun’ is a noun, not an adjective, although some people use it as one.” (My daughter is a grammarian, but also a psychiatrist, so she is in no way judgemental, like me.)

I am happy to know that “fun” hasn’t gone totally gone over to the other side, and along with a few of my peers I will continue to use “sneaked” and “dived” as the past tense and past participles of those verbs, but perhaps when I do, people of my granddaughter’s generation will say to themselves, “Silly old fart. Didn’t he learn any grammar at school?” Language evolves.
Posted by Carolus Peregrinator at 16:13